You are here: Home / Blog / Breed Information / All About Bichon Frise Dogs

All About Bichon Frise Dogs

The Bichon Frise adores human companionship. He is a charismatic breed that is charming, bold and energetic. The Bichon is exceptionally friendly, and is sociable to all, including children.

Bichons are quite intelligent, and even though they may be difficult to housebreak, they excel when properly trained. In fact, the Bichon enjoys doing tricks, and is happiest when active and with their owner.

Although the Bichon Frise makes a wonderful watchdog as he will bark to alert his family to strangers, by nature he is not a yappy canine. This makes a Bichon a wonderful companion and friend to live with. He will bring plenty of happiness to your life, and could be the breed you’ve been waiting for.

The Bichon Frise was developed in the Mediterranean region and existed well before the medieval period. The ancestors of the Bichon were the Barbet Water Spaniel and the Poodle. Not only was the Bichon developed from these breeds, but their name was also derived from their Barbet ancestors, as they were originally called “Barbichon”. This name was later changed to the simpler name Bichon.

Although the breed was popular with sailors, it was in Spain where the Bichon Frise gained its first real popularity. In fact, although the Bichon was native to the Mediterranean, it wasn’t until the 1300s that the Italian sailors rediscovered the breed during their voyages. These sailors are credited for bringing the breed back to the continent. Upon their return, the Bichon become popular among Italian nobles. It was also during this time that the Bichon Frise was groomed in a specific fashion to give them a similar appearance to a lion.

As time passed, and the Renaissance period occurred, the Bichon continued its popularity in Spain and made their way to France where they were also well received by the nobles. After the renaissance, the popularity of owning a Bichon Frise died down. The Bichon did not appear in vast numbers again until the late 19 th century. Except this time, it wasn’t among the nobility where Bichons made their mark, it was among street performers. The Bichon had now become known as a “common dog”.

During his reign as a “common dog”, the Bichon Frise became a circus dog and could often be found performing tricks at fairs and the circus along side their owners.

It wasn’t until the 5 th of March, 1933 that the Bichon was recognized as an official standard by the Societe Centrale Canine of France. After their official adoption, the Bichon was provided a name based on his distinctive physical appearance, and became known as the “Bichon Frise” (“frise” refers to the dog’s soft curly hair).

The Bichon Frise eventually made its debut in America in 1956, but it wasn’t officially recognized by the American Kennel club until 1972.

The Bichon Frise is a very friendly breed that is part of the Non-Sporting or Gun Dog group. They weigh anywhere from 10 – 18 pounds, and usually stand to between 9 – 12 inches at the shoulder.

Their size makes them compatible with apartment living. What’s more is they tend to be active indoors, and will not have a problem with getting the exercise they need inside. That being said, a Bichon still requires outdoor exercise and will love going on nice walks, or enjoy a nice romp in the backyard.

Due to the fact that the Bichon Frise has such a friendly temperament, they make excellent family companions. They do well in homes that have children and those that don’t. The Bichon loves to play with children and enjoys their company. In addition to children, the Bichon also does well with other family pets.

Bichons do not shed, but require daily grooming and their coat should be bathed once a month. This dog will also need to be trimmed every month to maintain the standard look. In addition, the eyes may need special care as they are prone to tear stain.

The Bichon Frise is a relatively healthy breed and lives an average of 12 – 15 years. However, they are prone to skin, knee, eye, and ear problems, as well as epilepsy. Furthermore, the Bichon should be protected from the elements as he is highly susceptible to sunburn, heat stroke, and the cold.

As far as training is concerned, this breed often proves to be difficult to housebreak, but likes to learn. The Bichon does not require aggressive training, and likes challenges. He enjoys learning tricks and is competitive.

The Bichon Frise is a wonderful dog that is a joy to own, regardless if you have previous dog experience or not. 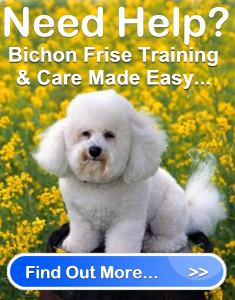